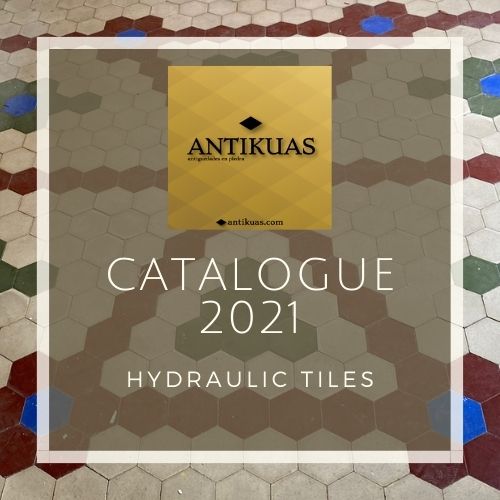 I could also have titled this Post in another way: The hydraulic mosaic: object of desire.
But I was short and you will see why.

And it is that talking about hydraulic tiles, necessarily, it should be mentioned, on the one hand, its origin linked to the care of the environment, on the other hand the industry and the construction sector, and finally, and the most attractive, visually, art that was reflected in each of the creations.

For this reason, this post is an outline of future articles in which we will address the fantastic world of hydraulic tiles.

Sample of 4 Models from the 2021 Catalog of Old Hydraulic Tiles from our Antikuas exhibition in Spain.

The origin of the hydraulic tile

Thanks to Portland cement, but 25 years after it was patented, a new technique for the manufacture of tiles was invented, which, without the need for firing, resulted in a more ecological and much cheaper production.

All this happened in Viviers (France) very close to the first cement plants in the mid-nineteenth century, but this technique was soon exported to all of Europe, especially to Italy, Belgium, Portugal and, of course, in Spain, and other territories. with colonial history.

How it was produced

The process is a fusion of craftsmanship and mechanization, it consisted of creating metal molds or climbers, manually using the artist’s template and which were fixed to the cement base by using a hydraulic press, although the name of hydraulic tile It is not given by the use of this mechanism but by the use of water as a cement hardener.

It is the back of the tile and it is a mixture of sand and Portland cement finished with a certain roughness that guarantees adherence to the gripping mortar.

It is the drying layer, also composed of a mixture of Portland and sand of better quality than the base layer and whose function is to absorb the water from the upper layer.

Obviously it is the visible layer and consists of a paste of white Portland cement, sand (very fine) and pigments, it is where the craftsman works distributing and spreading the pigments using the molds to reflect the designed shapes.

Thus, the process coincides with the 3 layers, which we have indicated, the top layer being the most delicate and important, that the more complicated the design is, both in terms of shapes and use of colors, the more elaboration time is required.

The three layers are formed in a frame that is placed under a hydraulic press that compresses it and then extracts the metal mold and allows it to dry.

Once dried, they are immersed in water for a day and stored for about 20 days spraying them with water so that the cement hardens properly.

This technique had a resounding success, since it allowed the bourgeois class to enjoy decorated floors at affordable prices and therefore the flooring industry is growing exponentially, in fact, only Spain had more than 1000 factories.

But not only in Spain, our export capacity and influence in Latin America and North Africa led to the creation of this industry in countries such as Cuba, Argentina, Mexico and Algiers, among others.

Because it is a modern, colorful and inexpensive type of flooring, it has become the most popular flooring in new buildings. It was widely used until other industrial and lower-cost materials displaced it in the 60s of the 20th century.

The new constructions, especially during Modernism, made use of this type of material because it is a colorful and modern floor, but also because of its low cost compared to other floors such as marble.

As the headline of this Post reads, we cannot fail to mention the importance of art, especially due to the coincidence in time of the popularity of the hydraulic slab with Modernism.

Illustrious architects and painters were hired for the great aesthetic possibilities that this technique had and that basically focused on geometric, nature and floral figures that with the combination of colors allowed the creation of authentic paved rugs.

The work of Gaudí, Lluís Domènech i Montaner or Alexandre de Riquer, are some examples to highlight in the art of flooring paved with hydraulic tiles.

Although the use of hydraulic mosaic has had its ups and downs, it is a fact that today, ancient hydraulic tiles have great value, not only for the art impregnated in their pieces, but for the history behind it.

In future Post we will talk more about this exciting topic, not only about the past, but also about its future, we will try to help our clients, how to place them, and best practices for their conservation.

In conclusion, from Antikuas, we believe that floors paved with hydraulic tiles are an investment, which not only wins as an asset but is enjoyed, also for both private homes and businesses, the aesthetic possibilities are unlimited since they combine with any style.

We invite you, of course, to visit our catalogue of hydraulic floors and to contact us for any questions or concerns you need.