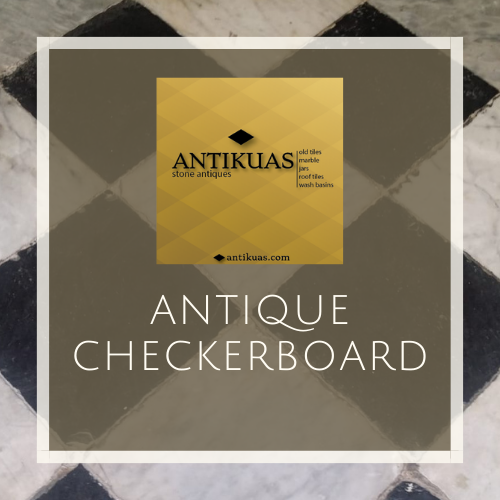 Contrary to what we may think, the aesthetic technique of using light and dark checkerboards for the floor did not exactly begin, to tile floors.

The checkerboard or chess pattern (as the English speakers say) was used around 3000 years B.C. in clothes and vessels, a proof of this is this Egyptian vessel that is currently exhibited in the Metropolitan Museum in New York.

or this piece of the Chancay culture 1200 BC. in South America, specifically the current Peru.

When the use of stone is applied to floors, especially marble, this checkerboard-type aesthetic, not only combining black and white, but also with other contrasts such as gray, begins to be used in buildings and special rooms.

A clear example of this is the fresco room located on the outskirts of Pompeii, dating back 2000 years, in which the entire room is crowned with a marble checkerboard, it is a Roman house known as La Villa de los Mysteries

The use of this pattern to beautify the floors extends, and it is in the Churches and Palaces, where the architects, inspired by the Greco-Roman classics, take their maximum splendor.

Renaissance artists reflected it in their work as you can see in these paintings.

But thanks to other artists, such as the manners Johannes Vermeer, we can see that more modest houses used the checkerboard as a pattern in the flooring.

Other architectural works worth mentioning in this humble post dedicated to the ancient marble checkerboard are:

The palace of Solecio

The palace of Versailles

The architecture with neoclassical influences had an international expansion, one of the examples is the so-called Federal Architecture in the United States inspired by the neoclassical movement and both the White House and the Capitol is a clear example.

At this point in the Post, you may wonder … What does Amazon have to do with all this?

It is the way that we have come up with from Antikuas to convey to you that acquiring old checkerboard flooring cannot be done in a “marketplace” like Amazon, they are highly appreciated pieces and a certain specialization is necessary to distinguish the authentically old from replicas that may seem old and they are not.

Antikuas has been buying and selling this type of flooring for more than 50 years and we are possibly the company with the largest available stock of antique marble checkerboards.

We could say that the antique marble checkerboard is fashionable, but it is not like that, it has never been out of fashion, that is why it is a classic.

In fact, the checkerboard floor has become a hallmark of many decorators, interior designers and architects, such as Dorothy Draper or Frances Elkins.

In addition, checkerboard flooring has become very fashionable, “in fashion”, especially since the Louis Vuitton fashion show in Paris inspired by this pattern.

In a future Post, we will talk about the interpretations behind this pattern, such as its use by Freemasons.

We hope with this Post to encourage interior designers, architects and also individuals who are thinking about how to give a neoclassical touch to their projects, to count on Antikuas for any questions that may arise.